Cave of the Lakes of Kastria

In the village of Kastria in Achaia, 9km from Kleitoria and 17km from Kalavrita, the famous “Cave of the Lakes” is located. It is a rare creation of nature. Apart from its labyrinthine corridors, its mysterious galleries and its strange formations of stalactites, the “Cave of the Lakes” has something exclusively unique which does not exist in other well-known caves. Inside the cave there are 13 successive terraced lakes, which are formed at three different levels, a phenomenon that makes the cave unique of its kind in the world.

It is an ancient subterranean river-bed, whose explored length is 1.980 m. In winter when the snow melts, the cave is transformed into a subterranean river with natural waterfalls. During the summer months, part of the cave dries up, revealing one of a kind lacy stone basins and dams of up to 4m in height. The rest of the cave retains permanent water throughout the year in 13 picturesque lakes.

The water, which crosses limestone rocks of the Jurassic period, has basically formed three levels. The first section, directly after the entrance, is fordable and dry and has thick deposit layers (backfills). The second consists of 13 small and large lakes at different levels, where water has created a stone decoration of exquisite beauty. Finally, the third section is dry and flat. Always accessible to man was only the first part of the cave, which has a length of about 80m.

The walls are ornamented with colourful stalactite and stalagmite formations, while “chandeliers”, “jellyfishes” and stunning “fluted curtains” hang from the high of 30m ceilings. Their reflections in the still waters of the lakes thrill the visitor.

The developed part of the cave is currently 500m long. It includes artistic lighting. The visitor enters the cave through an artificial tunnel, which leads directly to the second floor. The dimensions of this chamber inspire awe, rapture and admiration. The lakes are spanned by small, elevated, artificial bridges.

Human and animal fossils including a hippopotamus have been found at the cave’s lower floor. This part is intended to become a bio-speleological laboratory of international standing.

Anthropogenic deposit layers (backfills) (fireplaces, successive floors, ceramic finds, food residues, tools, weaving weights) make clear the continuous but not uninterrupted use of the cave from the Neolithic Age to the Late Bronze Age. The most important phase of the cave belongs to the Modern Neolithic Age, from which most of the moving finds of its prehistoric use come from. The fewer newer ceramic finds cover chronologically a wide period, from the Late Classical to the Roman Times.

In 1964, the residents of the village of Kastria reached for the first time the second floor, using wooden ladders from a ramp of 9m height. The cave was explored by the Hellenic Mountaineering Association, with the help of Prof. I. Melendis and mapped by the Hellenic Speleological Association under the supervision of Mrs. Anna Petrochilou. The development of the cave began in 1981 by the Hellenic Tourism Organization and it continued from the former Community of Kastria. Today the municipality of Kalavrita is responsible for the operation of the cave. 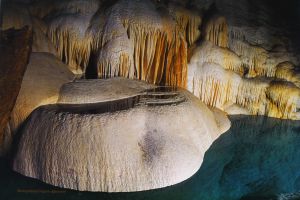