By the royal decree of 3rd April of 1833, the province of Kalavrita was first established within the framework of the New Greek State. Then, in 1997 by the Kapodistrias plan, four new municipalities were established, the municipality of Kalavrita, Aroania, Lefkasio (later Kleitoria) and Paion.

The town of Kalavrita and the surrounding area is a tourist attraction for all seasons of the year. This place has a long history through centuries, incomparable natural beauties and attracts visitors throughout the year, since several forms of tourism have developed, such as: winter, religious, museum, cultural, agricultural, natural and sports tourism.

The visitors can discover the historic monastery of Agia Lavra, where Palaion Patron Germanos declared the Greek Revolution of 1821, blessed the fighters’ weapons and raised the flag of the Revolution, which was the curtain of the Temple’s Holy Beautiful Gate, for the independence and liberation from the Turkish yoke. Also, they can visit the monasteries of Mega Spileo, Makellaria etc., the local product stores, exercise in multiple ways (skiing, climbing, hiking, canoe, kayak, mountain cycling, flyparapente, etc.), explore the mysteries of nature, acquaint with the town’s history and generally revive their body and spirit.

The Kalavrita Ski Center is a challenge to your senses and a paradise for winter sports. It is located at the slopes of mountain Helmos, at a distance of 15 km from Kalavrita and it has been operating since 1988. It is worth mentioning that “Aristarchos” telescope is located at the top of Helmos, which is one of the biggest European telescopes. Also the legendary waters of Stygx well up in springs of the mountain Helmos.

The historic Cog Railway, which has been inaugurated in 1896, has since been travelling one of the most enchanting and adventurous courses through the gorge of Vouraikos River. It starts from the town of Diakopto and goes through tunnels, big and small waterfalls, tributaries and impressive landscapes.

Across the train station, there is the old Primary School, which is a donation of the national benefactor Andreas Singros. Today it houses the Municipal Museum of the Kalavritan Holocaust with exhibits of the Kalavritan life before and after the Holocaust of 1943, in which 696 Greek were executed by the Nazis.

Other valuable sights of the town is the historic Metropolitan Cathedral of Kalavrita, which is dedicated to the Assumption, the Heroes’ Monument and fighters’ busts of the Revolution of 1821, the Byzantine Mansion of Palaiologina, which has been recently restored and it houses the Municipal Art Gallery of Konstantinos Fassos, as well as the Plane Tree of the three Elders in the historic Helmos Square.

The Site of Sacrifice of the Kalavritan martyrs, who were executed there by the Nazis in 1943, dominates majestically above the Historic Town of kalavrita, representing a Universal Symbol of Peace. There is also the Frankish Castle of kalavrita, from where it said that Ekaterini Palaiologou committed suicide in 1463 to get away from the Turks. The castle was named after her “Castle of Oria”.

The archaeological sites of Ancient Loussi and Psofis, as well as the theaters of Ancient Leontio and Ancient Klitora are also important attractions of the area.

The legendary Cave of the Lakes of Kastria is close to the village Kastria, at about 17 km from the town of Kalavrita. It is a rare creation of nature, an ancient subterranean river-bed, with labyrinthine passages, mysterious galleries and special formations of stalactites. Finally the rivers Ladonas and Erimanthos are ideal for rafting, canoeing and kayaking, enhancing more the beauty of the natural landscape of Kalavrita. 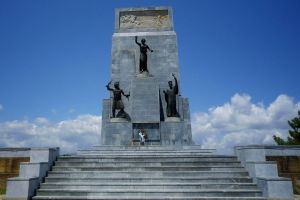