Lake Plastiras is located at Nevropolis plateau in the western part of Karditsa prefecture. It is an artificial lake, formed by human intervention. It was formed in 1959 after the completion of the dam at the southern end of the beginning of Tavropos or Megdova river and the idea for the construction belongs to Nikolaos Plastiras, since from the moment of the idea conception until his death he supported and promoted its construction with fanaticism. The dam is managed by PPC S.A.

The depth of the lake varies and is determined by the region terrain before it was covered by water. It contains 400 million cubic meters of water, has a maximum length of 12 km, a width of 4 km. And its total area is 24 km. It has maximum depth of 60 m. and a maximum elevation of 750 m.

In recent years the lake has a touristic exploitation and attracts more and more visitors, who enjoy the landscape beauty and the excellent tourist infrastructure, being developed primarily on the western shores. Hostels and hotels, perched on the slopes next to lake banks, with panoramic lake views, excellent restaurants and cafes, and a variety of activities covering the needs of the most demanding visitor. This development helps retaining the population in the area and allows the creation of new activities, mainly focused on mild forms of tourism and the production and distribution of local agricultural products. 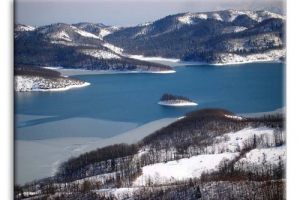