The creation of the lake was the result of major geological upheaval. Trichonida is residue of an older and larger lake that prehistorically occupied the entire Agrinio basin. This process is estimated to have taken place about 15 – 20 million years ago.

Trichonida has a surface area of 96.5 km2, the perimeter is 51 km and its depth is 57 meters. To the east the morphological slope of the mountains is high and the coasts are steep, while the remaining part of the terrain has smooth tip and as a result in many parts of the lake, and in combination with the large size of the lake, the lake shore is like sea shores. There are five (5) spanned Municipalities around it (three former municipalities and 24 communities).

The water volume is about 142 million cubic meters. The inward amounts of water come from sources, mainly underground ones and 15 large and several other streams, which start from Panetolikos and Arakinthos mountains and end into the lake. The quantity of water derived by the drain of Panaitolio – Kainourgio region that use irrigation water by Acheloos river. The lake is connected with Lake Lysimachia with a canal. The amount of water that flows to Lake Lysimachia is controlled by the doors next to Alampei bridges. 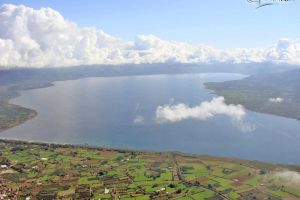