Historians of ancient times report Lake Kerkini for the first time under the name «Prasiada» and place it in the northwestern part of the plain of Serres. Dense forests of oaks, beeches, pines and chestnut trees were covering the mountains and hills, where boars, deer, bears, huge bulls, leopards, lynx and lions were living. According to historians, lions attacked the Xerxes’ camels during the passage of the Persian army from the river Strimonas. The lake and its marshes provided the raw materials to ensure the survival of the inhabitants. After the Asia Minor Disaster, about 85.000 refugees settled in the wider area trying to survive under harsh conditions.

The momentum of the uncontrollable river Strimonas was ruining crops and settlements, while malaria was decimating the human souls. As a result, 20% of the refugees died in a short time. The Greek government, in 1928, assigned to the American company JohnMonks-Ulen & Co the implementation of sanitation projects in the plain of Serres. Thus, in 1932, the first dam next to the village Lithotopos was delivered, creating the artificial reservoir of the lake Kerkini and draining at the same time the lake of Achinos and the marshy lands in the plain. Due to the transfer and dumping of large quantities of sediment from the river, it became imperative a new higher dam to be constructed, as well as the dykes to be lifted and expanded. These projects were completed in 1982, increasing the capacity to store larger quantities of water for irrigation and improving the flood protection of the plain. The lake has the shape of a «pear», with the dam on the top near the village Lithotopos. Its maximum length is about 15km, the maximum width is 8,5km and the depth ranges from 1 to 10m. Its surface fluctuates, depending on the season, from 55 to 73 km2.

Lake Kerkini is a valuable ecosystem with multiple benefits and a multitude of values. The main ones are:

In October 2005, by decision of the Minister of Environment, Mr. Souflias, the Greek part of the basin of Lake Kerkini, which is located outside the planning regions of the prefecture of Serres (Municipalities of Irakleia, Kerkini, Petritsi and Sidirokastro and the Communities  of Agistro and Promachonas), was characterized as » National Park of Kerkini Lake «. With an area of 850.000 acres and rare flora and fauna, the wider area of the lake is a wetland of international importance.

The opportunities for sightseeing and providing information, which are offered in the wider area of the wetland by public and private entities, have increased in the recent years. So, those who are visiting the lake can get involved in: bird watching, boating, hiking, mountaineering, nature photography, fishing, cycling, canoeing, horseback riding, etc. 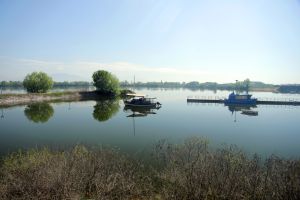 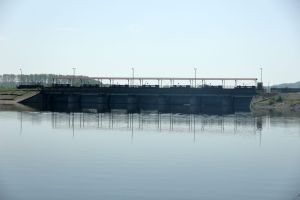 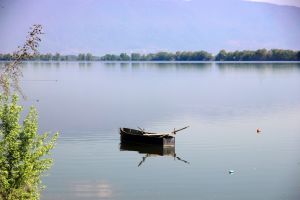